My winning portrait is of myself and my twin brother David, entitled ‘I was Blue, He was Red’. It was inspired by a photograph taken when we were babies.

My parents used to dress us in red or blue so they could tell us apart.

It was an idea I had been thinking about for a while after seeing an old photo of me and my brother in one of my parents’ old photo albums.

When I go back home to visit, my mum often likes looking at old photos together.

I had initially planned for us to wear red and blue socks but by a strange coincidence we were both wearing the right colours for the painting. 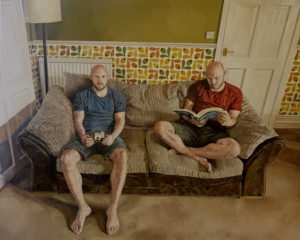 We use cookies to ensure that we give you the best experience on our website. If you continue to use this site we will assume that you are happy with it.OkNo thanksPrivacy Policy