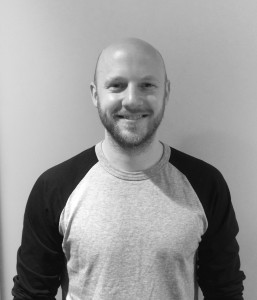 Michael Youds is an award-winning, artist based in Edinburgh, Scotland, specialising in portraits. Michael was awarded third place at the BP Portrait Award 2020 for ‘Labour of Love’.

The judges thought that this portrait was both poignant and funny. It definitely struck a chord as an allegory for a time and place that already feels nostalgic. It is a fascinating evocation of a particular male identity, for whom collecting is a passion and a way of life. The meticulous execution of the work also serves as a metaphor for the scene.

Originally from Blackburn, Lancashire, Mr Youds gained a first-class degree in Fine Art from Lancaster University before moving to Edinburgh in 2007. His work has previously been selected for the Royal Scottish Academy and Visual Arts Scotland exhibitions.

Michael is available for commissions and some previous work includes a portrait done for ex-MP Jack Straw and John Leighton, Director General of the National Galleries of Scotland, for which he received a highly commended award from the De Laszlo Foundation, at the Royal Society of Portrait Painters’ annual exhibition in London. He also has paintings in the Walter Scott Investment company’s art collection.

Michael Youds won the Scottish Portrait Award in Fine Art for his painting of himself and his twin brother. The winning portrait of Mr Youds and his twin brother David, entitled I was Blue, He was Red, was inspired by a photograph taken when they were babies. The artist explained that his parents used to dress them in red or blue so they could tell them apart.

The twins are both big fans of David Hockney, and Michael in particular drew inspiration from the double portraits Hockney painted early on in his career. By chance, his brother David picked up the book by chance when the photos were being taken.

Michael would love to hear from you to discuss his art work, inspirations and availability.

2017        Received a Highly Commended Award from the De Laszlo Foundation

2019-20     Selected for the Scottish Portrait Awards, Edinburgh, Glasgow and Kirkcudbright

2020-21     Shortlisted for the Scottish Portrait Awards, Edinburgh, Glasgow and Baniff

Winner: Michael Youds, ‘I was Blue, He was Red’